A digital platform for buying and selling NFTs is known as an NFT marketplace. NFTs sites enable users to sell their NFTs to other users in exchange for cryptocurrencies or cash, as well as store and display them. Some non-fungible token marketplaces allow users to mint their non-fungible tokens directly on the website and they can transfer them from one party to another.

The increasing popularity of NFTs may be greatly facilitated by NFT marketplaces, which constitute a highly important component of NFT trading. It appears that trading on next-generation NFT markets is about to become a reality as a result of platforms shifting to scalable, affordable solutions and more well-known firms entering the market. This has led to an increase in the number of NFT Marketplace Development Services.

Here are the top trends in the NFT Marketplace:

The most valuable assets in the blockchain era are gathered in NFT Marketplace. Despite being a relatively new technology, NFTs are rapidly establishing themselves as the norm. The finest NFT markets give both buyers and creators the best possibilities.

Our dedicated team of knowledgeable blockchain and NFT developers will step in to assist you with developing your non-fungible token marketplace. No matter what your goals and ideas are, with NFT Marketplace Development, you can emerge as the upcoming sensation in the fields of art and entertainment.

Blockchain technology has powered the usage of cryptocurrencies and other decentralized applications. Blockchain refers to the digital record of transactions that are distributed across a wide network of computers. Individual transactions in blockchain are called blocks that are assembled in a chain-like pattern.

The latest trend and development in the blockchain universe is due to the trading of collectibles through Non-fungible token development services. However, the Flow blockchain has proven to be the most reliable platform for NFTs, while Ethereum stands as the center of blockchain platforms used by many developers.

To understand the difference between blockchain technologies, let us compare both Flow Blockchain and Ethereum to know which is the best for NFT development.

Ethereum is one of the second-largest blockchain platforms known for its cryptocurrency called ether, or ETH, or Ethereum. It offers a decentralized open-source platform with innovative smart contract features inside the blockchain universe for the development of NFT services. Ethereum uses Solidity as a prime credible object-oriented advanced programming language that is similar to JavaScript, Python, and C++.

Flow Blockchain was launched back in 2020 and developed at Dapper Labs by the inventors of the CryptoKitties game. It is also said to be a successor of Ethereum. Flow blockchain technology was developed to create a blockchain platform for fitting billions of users of various decentralized apps. It is a fast and enhanced NFT development platform for creating NFTs.

Flow blockchain deals in its currency called FLOW which is a reserve asset used for paying transaction costs. Flow makes use of Cadence, its resource-oriented programming language, for the development of smart contracts. The Flow blockchain features have a strong static system and capability-based security.

The scalability of Ethereum offers a throughput of only 13-15 transactions per second which is inadequate for large-scale use. CryptoKitties game developers rose to prominent fame and success, due to which Ethereum couldn’t handle the huge inflow of users. Hence, Ethereum becomes incapable of managing large-scale transactions.

In Flow blockchain, the problem of scalability was improved by developing highly scalable DApps with top security that maintained decentralization. The multi-node architecture of Flow blockchain makes it an ideal blockchain technology over Ethereum. The Execution and Collection nodes of the Flow blockchain are enforced to improve network connectivity and perform complex calculations associated with various transactions.

Every NFT token development company must consider the transaction fees before choosing a blockchain technology for NFT development. Ethereum users have to pay Gas fees for the successful execution of smart contracts and making transactions. Gas fees are usually paid based on the complexity of the contract and network traffic. These are paid by Ethereum’s cryptocurrency ETH having an average price of $20. However, the gas fees may also differ.

An experienced NFT development company usually looks for blockchain technologies that work according to a well-organized consensus mechanism. Ethereum uses a proof-of-work (PoW) mechanism for tracking the number of blocks created by miners. Miners who can solve cryptographic issues quicker solidify cryptographic connections between blocks and share new blocks with the network to receive Ether (ETH).

PoW requires high energy. Hence the Proof of Stake (PoS) mechanism is used to validate ETH for contributing to transaction verification, which reduces gas charges and deducts energy usage. Ethereum has not yet implemented the PoW consensus mechanism, which increases Ethereum’s scalability problems.

An Ethereum account is created using private 64 hexadecimal numbers. After a successful generation of the private key, mathematical calculations are performed to derive the public key, which is then solved to obtain a valid address. This process is complex and one-way. In Ethereum, individual accounts can deploy smart contracts, and they do not have private keys. 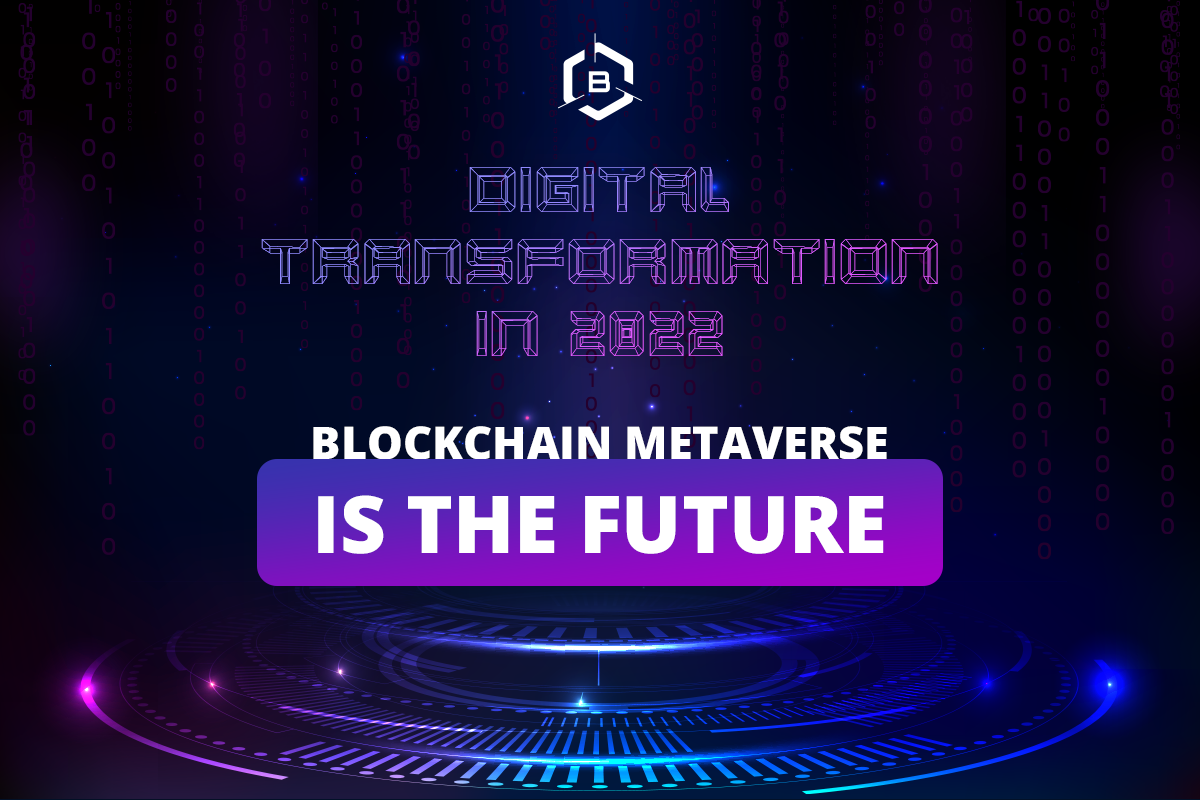 Metaverse is a virtual space where users can interact with digital objects and with each other. It is itself a real-time, persistent, infinite, self-sustaining, and decentralized platform. Blockchain metaverse is the future because it is easy to incorporate the circulation of cryptocurrency well into the metaverse. The use of blockchain and metaverse could contribute to a better living world. The core operational principles of the metaverse universe have developed and brought about a significant change.

Blockchain technology can help in the digital transformation of the metaverse. The fundamental aspects of the blockchain metaverse are as follows.

To ensure the full functionality of blockchain based metaverse, everyone needs to interact in the same virtual environment. Using such blockchain apps enables to lead a powerful decentralized ecosystem. It also allows seamless access to thousands of independent nodes for synchronization.

This technology implies the existence of highly-secured NFTs which are capable of transmitting digital content, private data, and authorization keys in an encrypted format. Hence, a blockchain consulting company ensures to amplify users’ trust in the virtual world by protecting their sensitive information from any third-party accessibility.

Smart contracts offer feasibility to regulate legal, social, economic, and other relations between users and the metaverse universe. It helps to integrate basic rules for the proper functioning of the metaverse.

Metaverse stores data and securely synchronizes for transmission. This blockchain technology is extremely applicable to the decentralization of data storage and other data processing nodes in the metaverse.

Blockchain performs joint functioning and sharing of information in different systems without any restrictions. When it comes to blockchains in the metaverse and NFT accessibility and valuation, interoperability becomes extremely pertinent.

The blockchain applications in the metaverse are very much diverse and can bring about a remarkable change in the digital transformation.

You can earn and sell converted in-game assets into non-fungible tokens or NFTs. It would also allow the use of VR gameplay to users for making real money that has actual value inside the metaverse.

The assets of users would remain completely undamaged even if the game is deleted; the user quits the game or any other hostile occurrence in the metaverse.

When users start navigating to the metaverse, their identity also evolves. The use of blockchain apps in metaverse can keep track of the individual security and self-identity of users.

Users can secure their age, changes in profile appearance, online activity, and other unique details on the blockchain technology for transparency to prevent cybercrimes in the metaverse universe.

Metaverse is new to the real estate market. It is envisioned that the emergence of metaverse real estate agents is going to cover the market gap. Just as in-game assets, real estate is another important feature in the metaverse.

The regulation of real estate in the metaverse is a challenging task. The real estate agents are found on professional webs that help investors, buyers, or renters to find the perfect valuable metaverse project/space. A well known blockchain app development company can help to keep a firm catalog of how real estate is created, altered, traded, and destroyed inside the metaverse.

The advent of the metaverse platform has opened numerous employment opportunities. The metaverse universe has been conducting recruitment drives to hire more skilled specialists.

To be more precise, this will be one of the first applications of blockchain technology in the metaverse. For example, last year, Epic Games sued Apple for charging a 30% extra fee for their famous game, Fortnite.

Many other issues can be cropped in the metaverse. The introduction of creator incentivization using blockchain technology is to ensure that there are no random, unfair constraints to govern the exchange inside the metaverse.

Metaverse will allow users to own their data and not worry about any interference from third parties. The use of blockchain applications in metaverse will enable users to emerge in immersive digital space to experience complete autonomy and trust within the metaverse.

Blockchain will remain an integral and vital part of the metaverse universe, as it allows users to safeguard their digital assets in a virtual atmosphere. Users can sell and earn NFTs to benefit from the digitized economy of the metaverse. It will remove any physical work stress and help to build a limitless virtual space for individuals.

No comments to show.